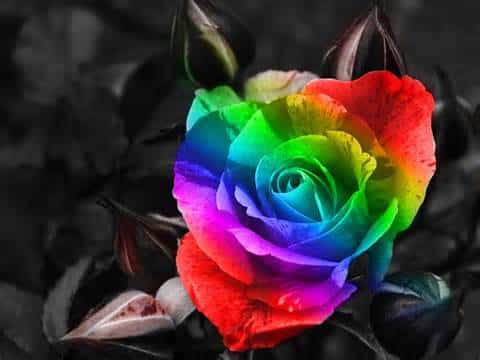 What is the True Meaning of the Rainbow? Promise of Hope!

(This was 1st published back in 2004 on When Magazine)

Almost everybody has seen the great vision of a rainbow radiating through the clouds at some time or another in their life, but has everybody really stopped and contemplated this natural phenomenon? It consists of beautiful hues of color. It astonishes and amazes many of us. But where does it come from? What creates it? And most importantly: Is there a meaning for it?

And.. Why is there a rainbow on the cover of this magazine?

First, There are some scientific facts that are quite interesting.

A Rainbow is physically produced by an amazing phenomenon involving the prismatic refraction of light, and the curvature of the earth. The prismatic refraction of light is created by the tiny droplets of water that make up the misty air of an after-rain sky. Tiny rainbows can be seen at the bottom of a waterfall, or even in a lawn sprinkler at times, for this reason. The tiny droplets add up to make a prismatic surface, similar to cut glass in a beveled glass mirror or door.

But the beautiful arc of the rainbow is created by the Curvature of the Earth itself as the mighty sun blasts through the droplets in the spherical atmosphere. Ancient philosophers could have realized what God had already revealed to Isaiah (Isaiah 40:22), that the earth was made in a “circle” or more specifically, that the earth is spherical. For… if the Earth was flat… there would not be the mighty arc of the Rainbow.

In 1665 Isaac Newton discovered and proved the prismatic function of clear substances and the spectral color make-up of light. By placing a prism in his window he separated the light, but even more importantly, he turned another prism upside down and turned the divided color spectrum Back Into White Light !

Sir Isaac Newton pointed out that the rainbow did not only consist of the 7 colors that we normally relate it to, but actually could be several thousand colors because of the fact that the colors gradually merge into one another, therefore creating numerous amounts of other colors as well. Now, please don’t get me wrong, it is rather evident that the number 7 is a very special number. Not only, are there 7 days in a week, 7 openings in our head, 7 seas, and 7 continents, but Bible Prophecy states that there are 7 spirits of God, 7 years of tribulation, 7 lamp stands, and 7 scrolls. This is barely a sample taste of the use of sevens and multiples of seven used in scripture, and let us not forget that God made the 7th day of the week, a very special day. Is it possible that God is trying to tell us something through the use of sevens? That concept is open to discussion, but there is one thing that we can know for certain. He is trying to tell us something through the use of the rainbow.

Whether you are a Scriptural Scholar or not, you must agree that the Bible is a great way to look into some parts of history, for it does match up with other sources. And, on top of that, the Bible is the best-selling book in the world today.

The story of the Rainbow in the Bible is quite simple and you can look up the scriptures in (Gen. 6:1 through 9:17). During the time of a righteous man named Noah, the world was just like our own time; taken over by a great deal of sin, but Noah was an honorable man. He listened to God and cherished a close relationship with Him, so God called upon Noah to build an ark, i.e. a large ship, so that he, his family, and a pair of each creature would be saved from the destructive flood that he was going to pour over the entire earth in order to rid it of its wickedness. After 40 days and 40 nights of falling rain, God told Noah to come out of the Ark, and that is when Noah saw the colors that God had placed in the sky, saying that it was His Eternal Symbol of Promise that He would never send another catastrophic flood to the earth to kill off all mankind. This was and is His covenant with all of us. The promise; this rainbow; and this “true” meaning of it, supplies us with promise and hope. That is exactly why it is on the cover of this magazine, because [The Clean Version] wants to represent Hope in a world of so much hopelessness, and to represent the Promise of a new day after each rain, in line with The Eternal Promise of God.